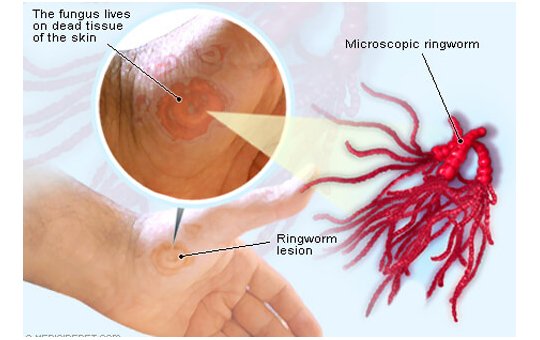 Ringworm is a common fungal infection that is highly contagious which is found on the skin and scalp. This infection is seen in every living organisms including humans, plants, and animals. This infection causes red, rough and itchy patches on the skin surfaces, which later spread to other body parts. These patches begin to ooze and develop into blisters. Ringworm has also been known to affect the scalp, groin, feet, beard and other areas of the skin. As the name suggests, ringworm is not caused by parasitic worms as they are caused by fungus species. These fungi grow well in the moist environment such as showers, bathroom floors and walls, swimming pools and also in between the skin folds. The vectors for such fungi include pets ( for instance cats and dogs). Hence, it would be better to keep them away from such surroundings. There are multiple forms of ringworm fungi, which affect different body parts.  Ringworm is also known by names like Dermatophytosis or Tinea.

The symptoms vary depending upon the site of infection. Here are the general symptoms of ringworm:

We are open 7 days a week and have won awards for our work. We offer some great monthly membership plans to make fees easier to plan for and we make booking appointments really easy.